Well, winter is on its way out so I thought it's time to write about what has been going on in Sydney over that period.
Since its inception last year, the Vivid Festival has been quite a success with cultural events around Sydney. Brian Eno was the curator for the first one. I did get a chance to hear him speak and he still thinks in a very lateral way about art, music and climate change. One of his clever ideas from many years ago was to create a deck of cards called Oblique Strategies.  When one got stuck on, say, a project, you pull a card out and act on its suggestion to help find an outcome. So if you're getting blocked, reach for an oblique strategy!
Oblique Strategies
This year Laurie Anderson and Lou Reed were the curators. I went to see Laurie do a talk about her life and curating the festival. She was the first artist in residence for NASA! She and Lou also did a subsonic symphony for dogs... I didn't attend as I don't have a dog and wouldn't be able to hear it!
Vivid Festival Sydney
There was also the Sydney Biennale going on over at Cockatoo Island and venues including the Museum of Contemporary Art. The Island is quite an experience in itself as there are many buildings and warehouses where the installations are housed. There are also cranes and heavy machinery, which could really be classified as installations themselves. The history of the island is colourful as it was a convict prison, then a ship building yard when the war was on. Now you can camp there and enjoy the sweeping views of Sydney.
Cockatoo Island        Biennale of Sydney       Museum of Contemporary Art
The other great winter activity was the Art Gallery of NSW having free movies which coincide with their exhibitions. I saw "On The Waterfront" with Marlon Brando's riveting scene with Rod Steiger in the back of a taxi. I also saw "The Sweet Smell of Success" which had Burt Lancaster playing an odious character along with a sensational Tony Curtis. It is Tony Curtis at his best, he just needed a good script. The big studios didn't want to make the film as they thought it was too raw and gritty, so Burt Lancaster's production company picked it up. I'm glad he did, it is a treasure to be enjoyed for all time.   Art Gallery NSW
Michael
Posted by Aqualash at 1:28 AM 0 comments 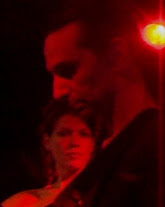